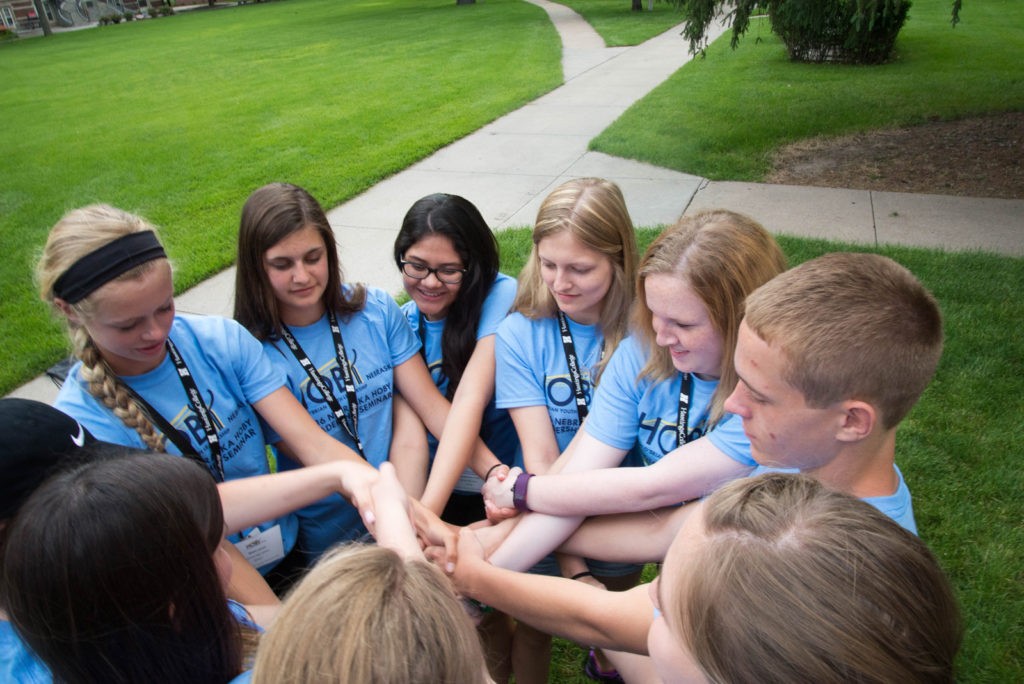 These are some of the words that students, schools, parents, alumni, volunteers and supporters use to describe Hugh O’Brian Youth Leadership (HOBY).

HOBY programs provide youth selected by their schools to participate in unique leadership training, service-learning and motivation-building experiences. Due to the selfless efforts of volunteers and the contributions of generous donors, nearly 9,000 students participate in HOBY programs annually.

Today, over 375,000 proud alumni make HOBY stronger than ever. HOBY alumni are leaders in their schools and communities, throughout the United States and the world, making a difference for others through service.

HOBY Nebraska is a 501(c)(3) non-profit organization registered with the Nebraska Secretary of State’s office. Our primary mission is to sponsor an outstanding leadership development conference for over 175 high school sophomores each summer. Additional programming is offered to high school freshmen and HOBY alumni throughout the year.  HOBY Nebraska was founded over 35 years ago, and has held seminars at multiple sites across the state.  Beginning in 2017, the seminar was moved to the campus of Concordia University in Seward, NE, where it remains today.

OUR MISSION
To inspire and develop our global community of youth and volunteers to a life dedicated to leadership, service, and innovation.

For more than five decades, HOBY has inspired young people to make a difference and become catalysts for positive change in their home, school, workplace, and community. As America’s foremost youth leadership organization, HOBY has a long history of successfully motivating young people to develop into outstanding leaders.

The heart and soul of our organization. We recognize and value what volunteers can achieve by working together. We believe our programs positively impact our volunteer leadership who are the heart of our programs as much as the youth and communities we serve.

Forms the foundation of our organization. We grow our organization based on interactions that promote mutual trust and respect with our stakeholders and partners. We strive to ensure the highest level of organizational effectiveness by continually reviewing our programs and processes to improve quality and efficiency.

We strive to continually raise our programs to new levels of excellence. We encourage entrepreneurship and innovation in business, education, and social responsibility. We develop creative solutions to address challenges and to utilize opportunities. We believe that leadership skills can and should be continually improved and refined.

We value and embrace diversity. We seek out views that reflect all walks of life and reflect those views in our programs. We are sensitive to the special needs and diverse backgrounds of individuals, our students, volunteers and our communities. We give all individuals an equal opportunity to be heard and to benefit from our programs.

We value community partnerships. We recognize the importance of working with community organizations to strengthen our programs by helping us provide all young people the opportunity to participate in and benefit from a HOBY program. We value the input we receive from our community partners and strive to work together cooperatively and constructively for the betterment of all.

BECOME A VOLUNTEER REGISTER YOUR AMBASSADOR

Motion picture and television star Hugh O’Brian has mastered his craft across the entire spectrum of show business. But with all his success he has never lost sight of his civic and philanthropic responsibilities. O’Brian has chosen to use his popularity to motivate others for a worthy cause, and to reinvest his good fortune by working tirelessly to develop projects to benefit young people. He is the founder of Hugh O’Brian Youth Leadership (HOBY), organized in 1958. HOBY’s vision is to motivate and empower individuals to make a positive difference within our global society through understanding and action based on effective and compassionate leadership.

Becoming a star was not always O’Brian’s ambition; he almost became a lawyer. Born April 19, 1925 in Rochester, New York (as Hugh C. Krampe), O’Brian attended school at New Trier High School in Winnetka, Illinois, and Kemper Military School in Booneville, Missouri. In high school, his sports activities were divided among football, basketball, wrestling and track, with O’Brian winning letters in all four sports. After a semester at the University of Cincinnati with studies charted toward a law career, O’ Brian enlisted in the Marine Corps at age 17. He became the youngest drill instructor in the Corps’ history, and during his four year service won a coveted Fleet appointment to The Naval Academy. After passing the entrance exams, he declined the appointment, intending to enroll at Yale to study law.

After receiving honorable discharge from the Marine Corps, O’Brian went to Los Angeles where he planned to earn money for his Yale tuition. There he met Hollywood movie stars Ruth Roman and Linda Christian, who introduced him to a little theater group. When a leading man became ill, O’ Brian substituted. Originally, he felt the acting experience might be helpful in his legal career; however, he got such good reviews in Somerset Maugham’s play “Home and Beauty” that he decided to enroll at UCLA and continue his theater appearances as an avocation while continuing his quest for a college education. About a year later, Ida Lupino saw one of his performances and signed him to play his first starring role in the film “Young Lovers,” which Lupino directed. This bought him a contract with Universal Studios. During his first year under contract, he enrolled at Los Angeles City College and managed to amass 17 college credits in addition to making five pictures at Universal.

The Freedom to Choose

I believe every man and woman, if given the opportunity and encouragement to recognize his or her own potential, regardless of background, has the Freedom to Choose in our world.  Will an individual be a taker or a giver in life?  Will that person be satisfied merely to exist, or seek a meaningful purpose.  Will he or she dare to dream the impossible dream?

I believe every person is created as the steward of his or her own destiny with great power for a specific purpose:  to share with others, through service, a reverence for life in a spirit of love.